From the dark forests of Sweden comes Maskinpop. The band consisting of Bob^ApanBepan/Genesis Project sings songs about important stuff like Last Ninjas, Judge Dredd and the burden of being really really cool 20 years later. In swedish!

DeathBoy is a DJ, game coder and industrial musician from the UK, specialising in filthy breakbeat music and bass-powered trouser destruction. Born in the irradiated wastelands of Staffordshire, DeathBoy suckled thirstily at the teat of oldschool rave (or as it was known then: 'rave'), jungle and hip hop. Later embracing industrial music, he followed a drunken path through d'n'b, breakbeat techno, chip music and more... arriving in a heap with a bottle of gut-rotting dubstep, waving around what he claims to be Keith Flint's spleen. He is, perhaps, best described as musically sarcastic. He wishes to make you dance. His price? Your trousers.

And then you get them big old lug00ber and Hoffman in front of you. They think they know what's tough. They think they're going to make a name off of my head. So I've got to get up every morning, break of dawn. I've got to get those Technics on. I've got to hit that vinyl; I've got to get those beats in my head. My hands are aching, my body is sore. I've got tracks like 'Smack My Bitch Up' beating on me every single day. I've got body breaking down, my mind getting pushed, feeling the effects of 20 years of dj'ing – feeling the effects of trying to put yourself in the best condition you can be in. Waking up every day having to deal with that? That's what hard times is about.

Once a humble attendee of the notorious EINDBAAS parties, RoccoW became hooked on the tunes of chip around early 2010. Never would he have guessed that, after playing the Open Stage, he would be allowed onto the main stage of the party he had grown to love! He soon joined the Dutch chiptune collective and would go on to perform his funky electronic tunes and strangely charismatic dance moves across the border. Inspired by everything good ‘n groovy – from the uplifting melodies of swing to the relentless rhythms tech house – RoccoW delivers a versatile performance with an abundance of silly faces!

Although mostly know for his uncompromising hardcore tekno, a lesser known fact is that Numtek also hosts a biweekly radio show at Radio Tonka, a former ether pirate radio broadcaster. This show runs for two hours and is  roughly divided into two parts. The second part is hardcore tekno and acid, but the first hour is mainly vaporwave, trap, electro, breakbeat, hiphop and 'electronic music' in it's broadest sense.

'Vaporwave' migtht be a term you haven't heard yet, so allow us to explain. Vaporwave could best be described as '80 hits adapted to the musical standards of today. In 2015 we want everything louder than everything else, so the whole audio-spectrum of those poor old '80-hits gets mangled, while the best parts are looped and the rest is cut out. It is supposedly is a genre that aims to critisice consumerism and free market capitalism but it is mainly what the Dutch call a 'feest der herkenning', which translates roughly to 'a masisve party celebrating all that we already know'. Mixed with chopped up vocalsamples it contains exactly the right dose of absurdism for a relaxed Friday night.

Lord/Spreadpoint was born 1974 near Frankfurt/Germany and as many of his peers thrown into the early age of home computers. Atari VCS2600 was followed by C64 then Commodore Amiga and with that some fame in the Cracker/Demoscene. Having Talla 2xlc’s Techno Club nearby in the late 80ies/early 90ies had a certain effect on his musical likes beside scene music. After studying visuals arts as a highly gifted he merged music and visual arts with the help of teachers like Luca Ancilotti/Snap among others. Nowadays he lives, works and teaches as a free Artist in Frankfurt. Lord will present a dark electronic live ambient concert with visuals and special hardware to celebrate the demoscene with the Revision audience on Saturday afternoon.

Just back from a mission in the international space station where, due to various incidents, he had to land back on earth by himself, Alkama understood what YOLO meant and decided to strike back at Revision 2015 with an old good afternoon liveset ! Dont plan for rest, this ain't for napping. Expect some waves of warm Moog and ARP basslines, hills of melodic Tech House and abysses of Techno. So come howl, put your hands up, throw balloons and dance along, or duck and cover till the storm is over. 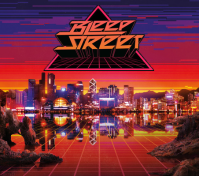 ZET.
Influenced by early techno and hip-hop, he started DJing and organizing party nights on a regular basis more than a decade ago in Augsburg and also co-founded the Robox Neotech label in 2000 with Doshy, Lakritze and some other crazy friends. A heavy Vinyl user, Zet. sets are strictly infectious and full of analogue thump!

METAKID
A funky monk with superhuman cognitive abilities, specialized in metabeats and generally rocking dance floors. A lover of big, dirty sounds and music that takes you to the future. Fasten seatbelts.

MASS:COTÉ
With a degree in Computer Science and A.I she moved to Berlin to work as a Music Supervisor. During the night she lives in the dimension of sound. A true ambient and chillwave head that blends the most delicate and subtle sessions, she is specialized in capturing and transmitting the deepest human feelings over sound.

COMPUTADORA
Equipped with a computer or two and an Amiga music modules collection of over 75.000 tracks, he selects and mixes the best tunes from the .mod scene. In the past 5 years, COMPUTADORA has DJed all over Europe at some of the most prestigious Demoparties, Clubs and Festivals, from Milano to Rotterdam, Prague to Copenhaguen, Oslo to Berlin.

Subi still owns the same pair of decks that he bought over twenty years ago, and is likely to play rave and breakbeat hardcore records of the same vintage, even though they’re worn almost transparent with use. He tends not to DJ much outside his bedroom these days, so this is a rare opportunity for all you DJ-spotters to tick off another number. Actual scratching ability will depend on the temperature on the day and the thickness of the gloves that necessitates.

With many releases of tracked modules and a recent history of a new commercial project, Bacter (also known as Itzik Shemesh from Tel-Aviv) is a veteran scener with a lot of ambition and passion for quality music.
Together with Zinger he composed a bunch of FM projects released in compilations such as "PsyVariar "The Mix"" (Egg Music - Japan), "SOUNDSHOCK: FM FUNK MADNESS" (Ubiktune) and "SOUNDSHOCK 2: FM FUNK TERRROR" (Ubiktune).
Along with fellow talented musician Saga Musix, he keeps on releasing tracked modules in some of nowadays' demoparties.
Bacter is also a part of the rising duo ""B1ZB1Z"", producing quality Nu Disco music and releasing it with the New York based label ""Media Blackout"".
Stay tuned for quality music :)

Dipswitch, member of Black Maiden Hi-Fi and Roots'n'Fruits, plays a vinyl set full of bass, drums, and echo. He will be there to show you that dubstep is not just about WUBWUBWUB, and dub is not just stoner music. Feel the bass and move your feet!

The most important rule there is regarding the Danish flag is that it is not allowed to touch the ground, as it means a war will break out in Denmark. The Danes at Revision, however, seem to have no qualms about dropping their textiles to the ground in copious fashion come compo time. And as if that wasn't enough of a guarantee for a riotous end to a party, they've selected the best of the best from their ranks to step up to Revision's barside stage right after the democompos have ended. Cheesy is his name, but not his reputation- and you are advised to prepare for a jolly good time, in traditional DUB style!

Glxblt is known for his energizing breakbeat-oriented music style. Seamlessly fusing drum&bass, breakcore, jungle and sometimes even music that goes wobwob, he is bound to leave a long lasting impression. Expect a full range of classic breakbeats and drumrhythms, twisted in a radical new way,
dark melodies and some distorted harsh sounds in between.

As the musician who made the soundtrack for the Breakpoint invitation, "Everything Is Under Control" we thought it would be fitting to ask Glxblt to take the stage for the final closing act on Sunday night.
We're not just going out with bang, we're adding all the other drumsamples as well!